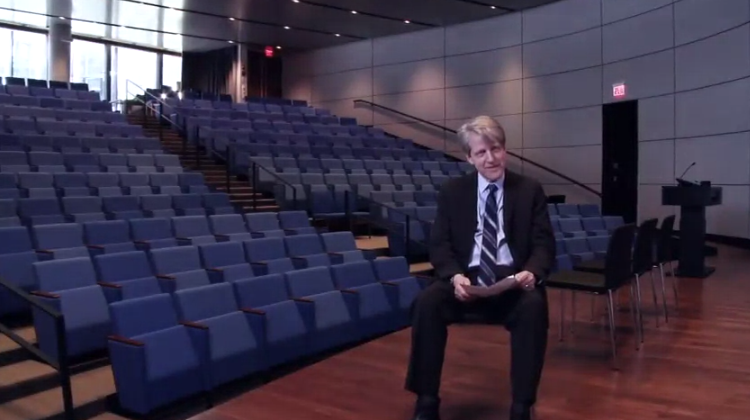 I’ve taken about a dozen business MOOCs so far as part of my effort to construct the equivalent of an MBA, for free.  I’m always on the lookout for new courses, and I was excited when Coursera released “Financial Markets” with Nobel Prize-winning economist and Yale University professor Robert Shiller. I had previously come across another version of this course through Open Yale, a site run by Yale University where anyone can access no-frills video and audio of lectures that were delivered live in the classroom. I started the Open Yale lecture series but didn’t finish it because Coursera announced their version of the same course when I was only partway through. I generally prefer Coursera’s condensed, made-for-online format, so I stopped listening to the Open Yale lectures and signed up the Coursera version.

When I first got interested in MOOCs, I read several articles decrying MOOCs as furthering the phenomenon of “rock-star professors,” the idea being that big-name profs reduce the number of jobs available to lesser-known professors and diminish the quality of university teaching, since they typically teach to packed lecture halls where one-on-one interaction is practically impossible. Being an online student with no hope of actually speaking with my professors, I am excited about the idea that I might take a course from a renowned professor, even as one of thousands.  Robert Shiller is about as renowned as they come. He basically predicted the 2008 financial crisis in his best-selling book Irrational Exuberance, and he won the Nobel Prize in Economics 2013, among many other career achievements.

Unfortunately, in its attempt to package Professor Shiller’s course for an online audience, Coursera missed an opportunity to use the MOOC format to surmount some of the obstacles inherent in teaching en masse. Instead, they managed to recreate many of the frustrations of a crowded lecture hall. Let me explain what I mean as we go through my three-part rubric for online courses.

Am I checking email during the video lectures?

This course passes the email test without a problem. Professor Shiller is clearly brilliant, the topics covered in the course are interesting and relevant, and the lectures are filled with history and anecdotes. However, the majority of the videos are the same lo-fi lectures I was watching on Open Yale, taken from when Professor Shiller taught this course in 2011. The sound quality isn’t great, the lighting is terrible, and the camera often pans away from the blackboard just as Professor Shiller finishes writing a formula. I often feel like a puny freshman in the back of the classroom, straining to see and hear what’s going on up front.

The best videos are the introductions to each week’s series of lectures, which Coursera produced specifically for this course. These videos are cheesy – each one features a different building on Yale’s illustrious campus – but the sound and lighting are good, and you don’t feel like an eavesdropper to a lecture that was made for someone else. These are also the videos in which Professor Shiller reflects on why, even with the bad image finance has acquired following the crisis, he still considers financial markets crucial to modern society.

Do the assignments require serious thinking?

The assignments for this course are composed of weekly quizzes and a peer-graded writing assignment. I was pleasantly surprised by the writing assignment, which required students to summarize an article about the psychological underpinnings of the financial crisis. The assignment was fairly rigorous, and peer grading worked better than I expected. It would have been even better if the peer graders had been able to provide written comments instead of just numerical scores, but that’s a minor complaint. The quizzes, however, are frustrating.  They are certainly difficult enough, but they often test material that wasn’t adequately covered in class – for example, formulas that appear on the board for approximately 3 seconds before the camera follows Professor Shiller across the classroom and are never practiced. This is where Coursera was being lazy. Even if Professor Shiller himself was too busy to record new videos in which we could practice using these equations, surely one of the course’s three teaching assistants could have held a weekly section.

Is there a practical application for what I’ve learned?

I’ve mentioned before that I’m partial to courses that are short on theory and long on concrete skills. This course doesn’t exactly fall into that camp, but even though there isn’t a direct practical application for the material covered in “Financial Markets,” having an understanding of such markets is a necessary precondition for being an effective participant in them. This course will teach you what financial markets are, how they arose, and how they work today.  Whether you are interested in using these markets, or just wants to have a better understanding of how they fit into our society, there is plenty of value to learning this material.

I think Coursera saw this course as a cash cow, an inexpensive way to turn pre-recorded lectures into a blockbuster MOOC featuring a star professor. They certainly built a lot of hype for the course; advertisements for it seemed to follow me around the web. But Coursera missed a chance to do more with the raw materials at its disposal. Any MOOC is a team effort. With Professor Shiller occupying the starring role, the rest of the team could have been called upon to flesh out the key concepts, just like in a live course where the big name professor is the draw and the TAs do the heavy lifting.

This course if definitely worth taking. Just don’t stress out about the math problems you can’t answer. Take this course to learn about the history and evolution of financial markets, to get a sense of the scope and purpose of these markets, to learn some terminology, and most importantly, to understand why an intellectual luminary like Robert Shiller thinks these markets are important to our society.